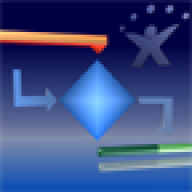 The Auto-scheduling is a powerful feature to save a lot of time to plan the tasks automatically. This feature is applied only on Auto-Scheduled issues in two steps through the following order :

This is a simple and classic dependency scheduling: the scheduling of issues through dependency links. The issues are not container issues.

In this example, all issues are auto-scheduled. The current date is used as start time of the first issue in the chain.

If there is a Manual-Scheduled issue on the chain, its Start and End times will be used to schedule the issues linked before and after. The selected issue in the following gantt-chart is Manual-Scheduled.

The Auto-Scheduled issues without any dependency are known as isolated issues. The scheduling is done separately in each group per assigned User. The following Gantt-chart contains two groups:

Here is the gantt-chart when the sub-tasks are linked in Start/End dependency:

Here is the gantt-chart when the sub-tasks haven't any dependency links, assigned to the same user and the container is auto-scheduled:

Here is the result of previous example if the sub-tasks are assigned to different users:

In case there are some dependencies and isolated issues under the container, like the flat scheduling, the Dependency Scheduling will be performed first, and then the Resource Scheduling in the scope of the container:

there is a conflict on scheduling between the tasks at the line 5 and 6.